To Dough or not to Dough?

One of my guiltiest pleasures when it comes to food is, I must admit, eating uncooked cake dough. As you can imagine, it all started when I was a kid but although a lot has changed since then (especially in the way I perceive and taste food), eating dough still remains one of my greatest guiltiest pleasures. 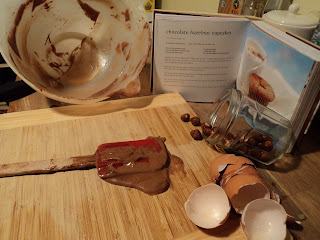 Growing up in a traditional Greek house, home cooked food always played a very important role in my family. Both my parents made sure there was always a nutritious meal on the table, and taught us to appreciate and savor food. My mother, a busy English teacher used to spend Sunday afternoons baking her favorite cakes. These Sunday afternoons, with the warm smell of vanilla or chocolate in the air, have stayed in my memory until today. I hadn’t realized how important my mother’s cooking had been in shaping my character but what she did, which I sometimes took for granted, created my first cooking experiences and contributed to my love for food.

I still remember trying to finish my homework early on Sunday so that I could sit by her in the kitchen and help. I was in charge of scraping the dough down the sides of the mixer bowl and stirring it, so that the ingredients blend well in the mixer. As we were adding each ingredient in the mixing bowl, I was tasting the dough from the scraper, experiencing every step of the process. Butter and sugar, then eggs, then velvety melted chocolate; flour, then sometimes spices or orange zest, depending on our desires. 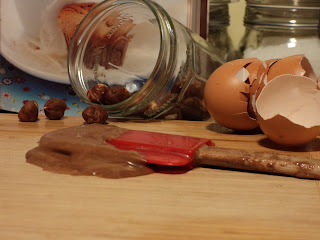 After every step, I tasted the dough and it was always different than the previous time. We were creating a unique combination of flavours and scents and I was fascinated by the way each ingredient made a difference in the texture and appearance of the mixture but also in its taste and smell. I was too young to know then but I think it was during those afternoons that I began to be fascinated by cooking. After mixing all ingredients together, we used to put the dough in the cake tin and I had the whole bowl (and the scraper) for myself! My mother always said how my stomach will hurt from eating uncooked dough but I must tell you, that never happened! 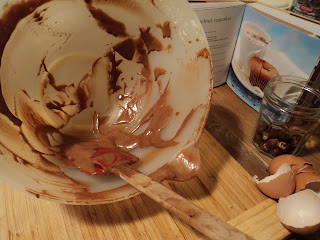 Every time my mother and I made a chocolate cake was an amazing journey of discovery, one that made me incredibly happy. I do not know if it is the warm childhood memories that arise every time I taste uncooked cake dough or if it is the taste itself, with each ingredient shinning and sticking out, but I sometimes decide to make a cake (or like yesterday, chocolate hazelnut cupcakes) instead of something else, just to taste the dough. And this is my guilty pleasure not only because one is not supposed to eat uncooked dough but because I think it tastes better than the cake itself!!!