Let's all scream for Ice Cream!

One of the very first summer memories I have as a kid is that of my parents bringing ice cream and cones home. This, along with the end of school officially marked the beginning of summer!

When it comes to ice cream, things were simpler back then. Well...it’s true. When I was growing up there was no Haagen Dazs and there were no playful Ben & Jerry’s ice creams. There were no nuts, no pieces of brownie or fruit in the ice cream. In each neighborhood there was only one ice cream shop and a few ice cream fridges in the periptera. Periptero is the greek word for a type of newsstand which also sell a million other things-from sodas and gum to chocolates and crisps. I liked the cheap ice cream from those fridges and the excitement I felt, running across the street to get one, together with my weekly Disney Mickey Mouse magazine.

But the fancy “Igloo” shop was the one I preferred. It sold simple ice cream with a silky smooth texture. No chunks whatsoever. It had the most amazing strawberry milkshakes that actually smelled like strawberry. This was my favorite while my sister preferred chocolate. My preferences haven’t changed over the years, although I now go for the amazing Haagen Dazs strawberry. Sister Ei now is another thing, as ice cream is probably the only type of food where she experiments, choosing pistachio, mango, or anything out of the ordinary. 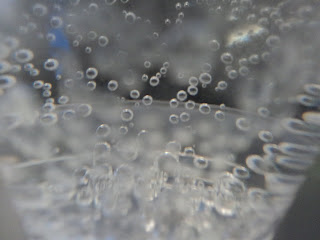 My parents would bring the ice cream and cones and my sister and I would gather in the kitchen, open the huge 1lt plastic square container, take a yellow plastic ice cream scoop and create the most fantastic cones. We used no syrup and no whipped cream; just the ice cream flavors we preferred, which our parents had made sure to get for us. The image of my younger sister’s mouth and nose covered in chocolate ice cream still makes me laugh. Sitting on the balcony, looking at a big green garden and licking ones favorite ice cream is all one needs at the age of 10 to be happy. I’m telling you, things were simpler back then :)

So let us start celebrating the beginning of summer this year with…what else? Ice cream recipes! Having read everything there is about ice cream, granitas and semifredos, I decided to go for it and make ice pops. It turned out to be so easy that maybe the hardest part is actually removing the sticks from the mold! Yay to Bon Appetit for its brilliant recipes! 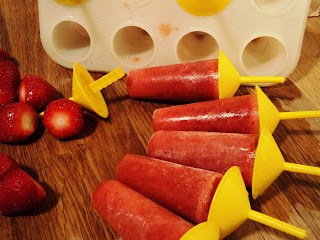 At my first attempt I used a handful of strawberries, a banana, a tablespoon of icing sugar and a bit of water. I blended everything together and then poured the mixture into the molds. The result was a tasty yet slightly crystallized ice pop. Excellent to cool you down during a hot June afternoon.

Seeing how easy it was I got eager to try more recipes! I tried blending milk with strawberries (no sugar) but the result was quite bland and the texture was worse than the previous mixture’s. But I think that was my fault as I accidentally used way too much milk! Piece of (obvious) advice: if the liquid doesn’t taste nice, the ice pop will not taste better! Blackberries, honey and yogurt will be my next week’s attempt and I am also going to make a fruit granita! Maybe with peach or apricot as they now begin to appear in the farmer’s market.

Have a super summer everyone!