Rite of passage, or else, a summer fruits graduation

This is an out of season blog post, but hey, the hot weather in Athens does excuse fantasising about summer. Past and future.

Three years ago, sometime in July, I was spending my last days as a financial analyst. Wearing a business black dress, I attended the General Meeting of Shareholders, having prepared drafts for the bank’s president’s speech. Beware dear reader, it is not as fancy as it sounds, for I was spending my days hidden behind a large computer screen, mostly pretending to be working, while in reality I was frantically browsing recipes, food blogs, university websites and cookery school programmes. I was waking up and going to bed feeling drained and tired, my only happiness coming from spending my Sundays cooking and writing this blog. By that time, three years ago, I had planned my “escape”, the start of a new life which, alas, filled my heart with fear. Had it not been for Mr N and our endless debates and discussions, I dare say I wouldn’t be here. For he saw in me what I was (and sometimes still are) unable to see: who I really am. Yet here I am, merely three years later, a PhD candidate researching Greek cuisine, who has somehow managed to get herself into professional kitchens and cook for a living.

Thinking back at the morning before my graduation last summer, I was wearing another dress (but not black and definitely not business attire), and was preparing what my sister insisted is a “better breakfast than butter-croissants-that-make-you-hungry-after-an-hour or eggs-and-bacon-how-can-you-eat-heavy-fried-food-in-the-morning”. As I cut the ripe, aromatic, juicy peaches (discovered after sniffing and touching all the peaches in the 4 grocery stores around my London house), I thought back to my first days in London, introducing myself in class as “I’m here to learn everything there is about food”. The months which followed I did learn, not only about food, but also about anthropology. I learned how to pronounce and use words such as juxtaposition or trajectories; I learned that there is no right or wrong, but complexity and layers and layers of meanings; I learned how food is not only the small, sweet raspberries I got from Borough market for a ridiculous high price (worth every cent), but also their journey from farm to table and their symbolic dimensions for people and cultures. And after days and nights of reading and writing and tasting some pretty amazing food along the way, I completed my MA degree and there I was, in my tiny London studio, with my loving parents, waiting to walk down the Graduation isle for my own rite of passage. 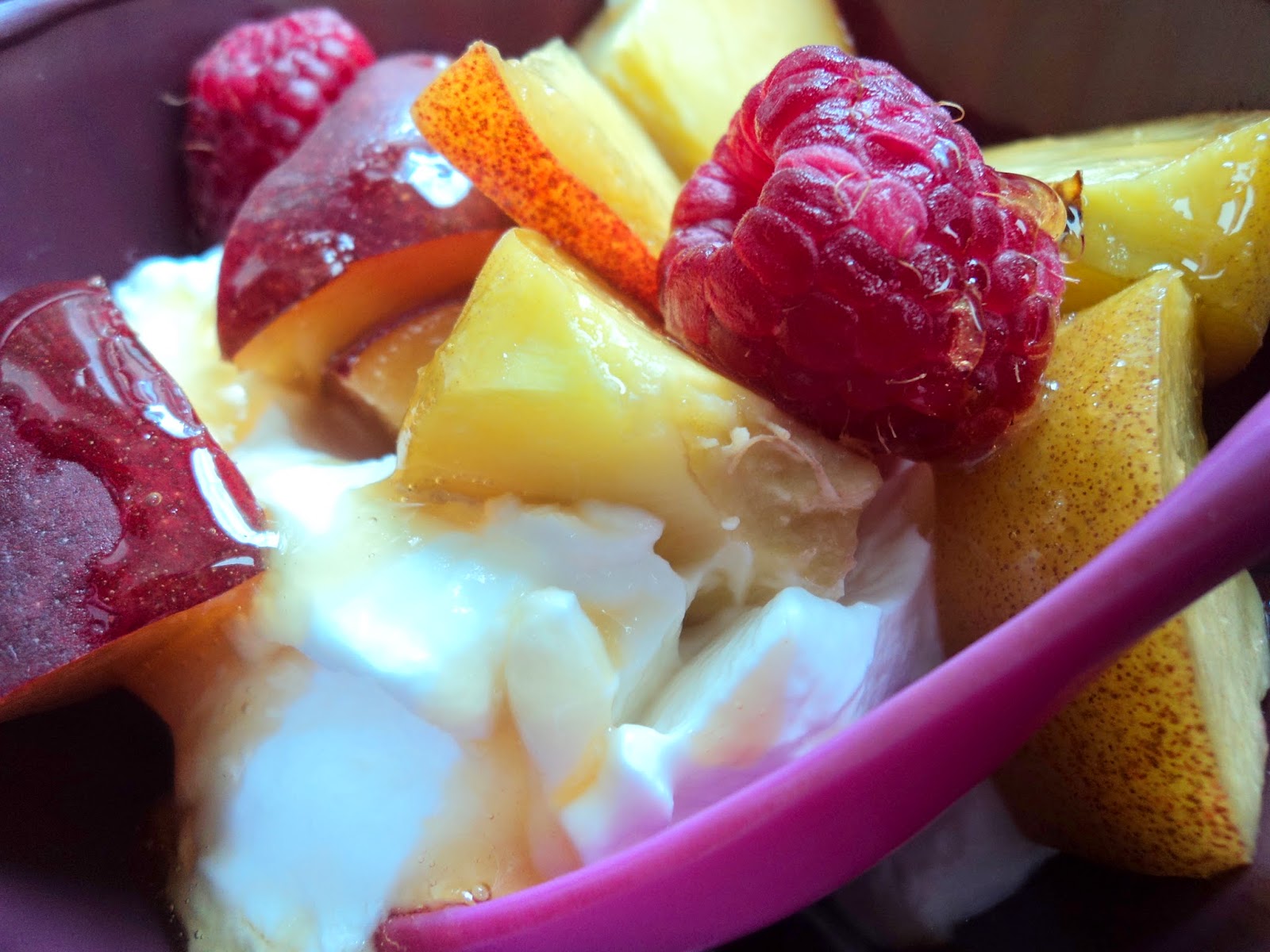 I laid the Greek yogurt on a colourful bowl (because you can’t use any of the runny, cheaper yogurt versions; you are replacing a butter croissant and fried eggs with bacon after all) and I thought back to my second year in London (for some reason Graduation day was a whole year after the end of my MA): cooking in a professional kitchen for the first time and feeling more at home than anywhere else; presenting my work at a conference and realising that I actually love talking about food to strangers (no fear of public speaking here); receiving endless rejections on my funding applications and managing to keep my faith and most importantly, not to burst into tears every time someone asks: so, did you get funding for next year? - I still have not by the way, so if you, dear reader, happen to have £3900 for my tuition, please get in touch and I’ll cook you a 13 course meal.

I reached for the pine tree honey (yes, it is Greek too, what can I say, Greece does make mind-blowing honey - no bias here whatsoever) and I drizzled some on my breakfast bowl. This doesn’t look so bad, I remember thinking, as I quickly took photos to send to sister E as proof of my good food habits. I took a spoonful of cold, tangy yoghurt, aromatic pine honey, warm ripe peaches and sweet raspberries and savoured the taste of British (with a hint of Greece) summer and the taste of a new life. 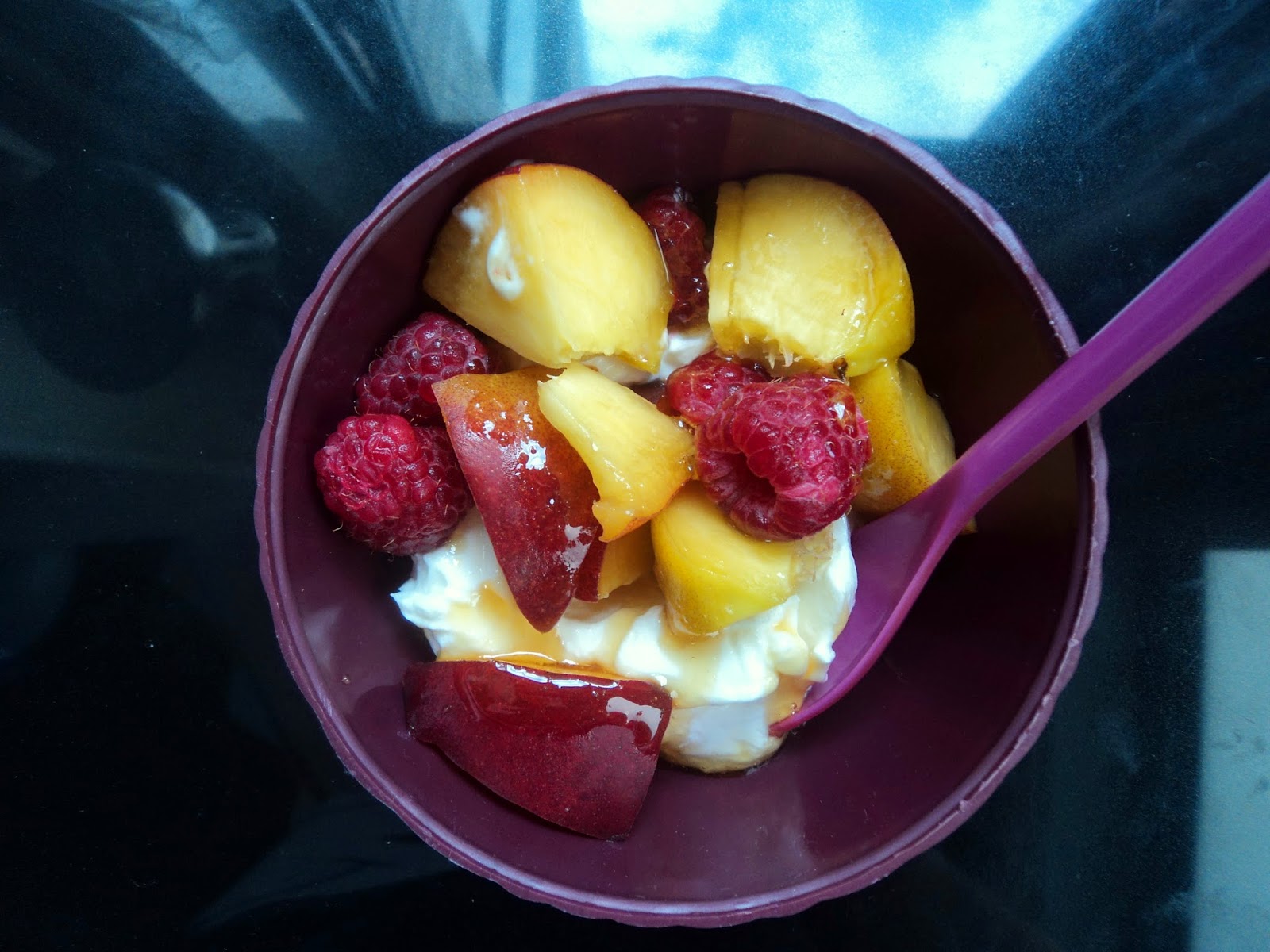 Today, a year after my Graduation, I may not know what my life will bring in the future, but somehow I know I’ve made it. I slipped on my shoes and smiled at Mr N who was waiting by the door. I looked at him thinking “Can you believe I’m here?” -He smiled back. "I've always believed it", his eyes said. "It’s time for you to see it". And I was off, for my rite of passage. I was now a food anthropologist. I was me.