When I was working as a line cook, in one of the kitchens there was a boy. He was very intelligent, his eyes sparkled. He didn’t particularly bother with creating the perfect julienned peppers like I was; he was slightly nonchalant I might say. But he had a better sense of taste than me. And he was, like me, fascinated by food. We would stand next to each other, tasting smoked almonds and trying to remember which childhood snack they would remind us. He would win. We would sneak into the walk in fridge, find the expensive edible flowers, put them in our mouths and try to guess what they tasted like. He would win there too. The dishwasher would mop the floor and we would try to guess what that smell was. He, of course, would win. Game after game, he was better than me and I envied him for that. I still do for that matter. But at the same time I was happy for I had found someone who was in many ways exactly like me when it came to food. Excited at tasting new things. Intrigued. Fascinated. Passionate.

After a stressful shift, we were both cleaning up the dessert station, when he approached me, and with his fingers wiped my cheek, leaving something liquidy on it, a naughty smile brightening his tired face. You crazy cook, now I have melted chocolate all over my cheek, I said trying to appear annoyed although I was of course very happy, for I felt like we were at kindergarten, where you could get messy with your food and it was all right. I wiped my cheek with the back of my hand, bringing it close to my mouth and instinctively licked it. I was expecting a sweet chocolatey flavour, we were by the dessert station after all, piping bags with of all sorts of chocolate substances around us. It tasted like metal. It was sharp and intense. What the hell is this, I shouted at him. He was now laughing. Blood, he replied. I cut myself.

Hearing the word blood, its taste made sense. I had of course tasted my own blood, biting my hangnails, or cutting myself. But this was someone else’s. It was unclean. And I was disgusted. And in a very savage way, I felt an intense, almost sinful hedonistic pleasure, mixed with appall and revulsion, balancing between the purity of indulgence and the uncleanness of danger. Thrill.

You see dear reader, I am one of those people who eats everything which exists within their cultural environment. At the same time I rarely seek to be disgusted. And therefore I rarely am. But lately I’ve been having this…desire. To experience…disgust.

Greek Easter came, and along with it a whole lamb appeared in our kitchen. I played with its head, it did not seem strange; it felt like a new toy. Mama K placed it in water “to release all of its blood” and then boiled it for what appeared to be a very long time. At the dinner table, alongside the traditional mageiritsa, a soup made with the offal parts of the lamb, heart, liver etc, the lamb’s head was served.

Mageiritsa looks a simple soup with cubed pieces of meat and shredded lettuce, all boiled together in a wonderful mixture with various textures. You know it entails hearts and livers but really, looking at it, you can never tell. You take a spoonful and you know that you are eating whatever bizarre part of the lamb. But only because you are told so. These are still pieces of meat, their names simply change. Their appearance, smell, taste, texture is similar to what we are used to characterize as “meat”. Which, in someone’s mind is rarely associated with an animal.

But the head. It was there. Oddly more alive then than when it was raw, covered in blood. It was looking at me and I felt uncomfortable. Its appearance turned it from “a piece of meat” into an animal. Something which was once alive. Something I could feel was once alive. My father ceremonially cut it horizontally in half and started taking apart all edible pieces. As simply as if he was deboning a chicken. On my plate, a piece of its tongue, a part of its brain and one eye were neatly placed. The eye still had its eyelids on. 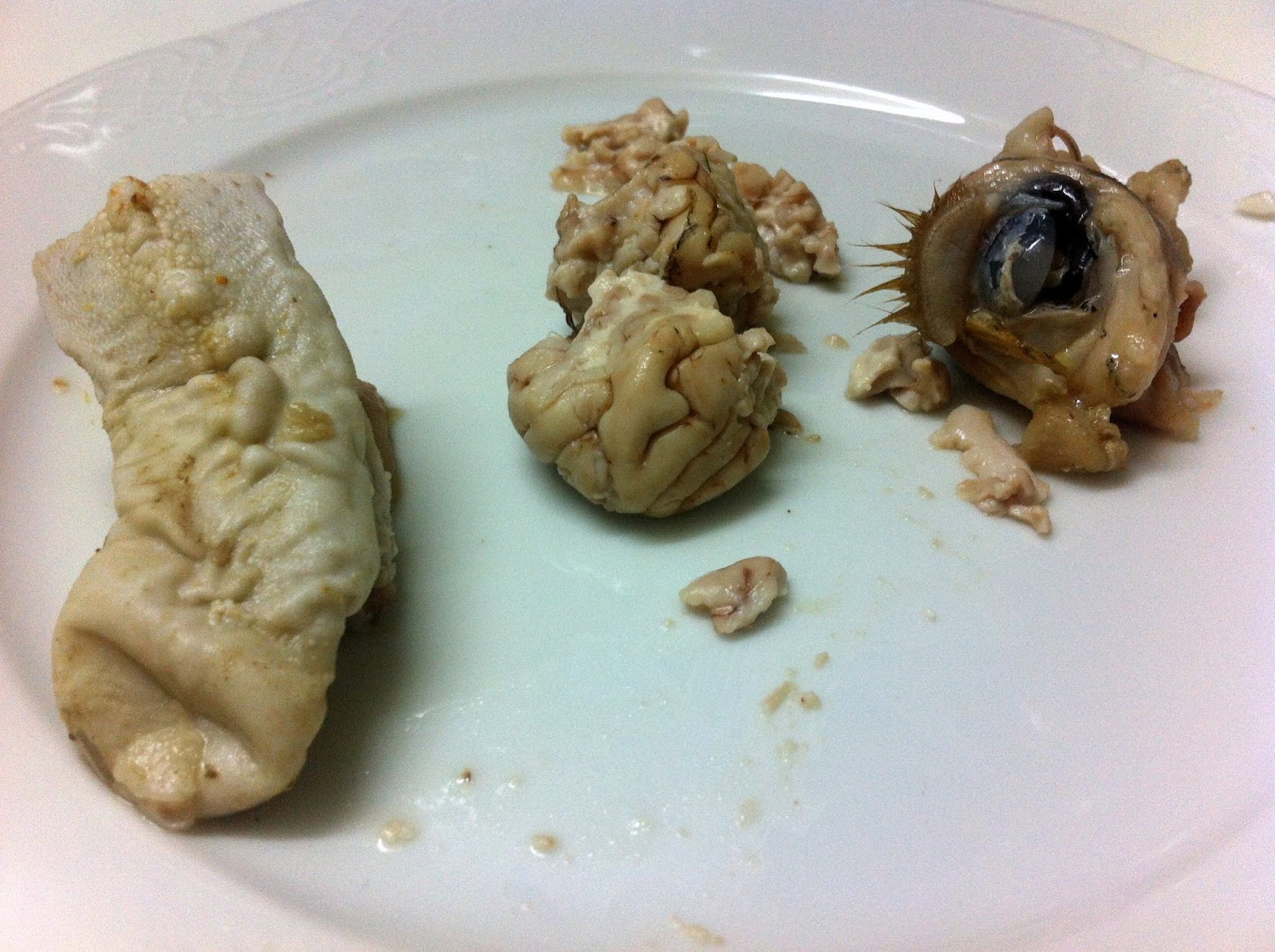 I sat there, my father and mother eating the remaining parts of the head, narrating stories of the past, of how lamb’s brains were once considered a delicacy and how much they enjoyed them. Sister E refused to even look at it. But Sister E is not a cook. Nor a food anthropologist. It was my duty -and my deep inner desire if I am being honest- to experience everything. Even disgust. I wanted to feel it within me. I took a bite of the brain, slowly putting it in my mouth. It was like butter would be, if it was made of lamb. Creamy, velvety and extremely lamb-y. But I couldn’t concentrate on its taste or smell. I wanted to spit it out. This was a brain. A lamb’s brain. For the first time in my food life my mind clashed with my feelings. I liked the way it tasted. My mind couldn’t handle that that it was.

Maybe that’s what it is, disgust. The medium through which our intellect clashes with our emotions. A way for the self to tell us that there is a disconnect. I want to taste something buttery and lamb-y. But it’s polluted, my mind replies. You cannot. What happens if you indulge in disgust?

I tasted the eye and almost gaged. As if entering a kinky playground, I licked the eyelashes to see how far I could push myself. The disgust was so big that it gave its place to something else. The same feeling I had when I tasted my cook’s blood. Tasting the culturally forbidden fruit. Hedonistic savagery. I wasn’t sure. But it was something raw.