I envy those people who throw a pan full of tomato sauce hard against the wall. I envy those people who make a mess, not thinking of the consequences of their actions, not worrying about the time it took them to finely chop the onions and garlic. Not caring about the time it took to gently fry them in olive oil. Not giving a damn about the hours it took for the tomato sauce to reduce. They made a mistake. The sauce is now burnt. The whole room smells like burnt, bitter smoke. 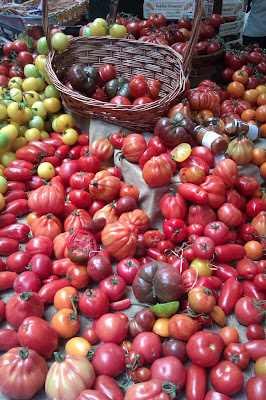 A very elegant lady would carefully discard the contents of the pan into the bin. She would place the pan under hot running water. She would clean it and start again.

The woman I envy gets angry. She gets furious. At the sauce that burnt without any notice. At herself for not paying enough attention. At the world for being so unfair sometimes. She would be filled with wrath. She would smell the burnt smell of no return. She would grab confidently the handle. She would throw the pan against the clean, white kitchen tiles. The pan would leave her shaking hand, almost liberating her from the anger. She would scream, although that’s not necessary. The pan would bang against the wall. No whimpers here, this is how it ends. The sauce, pieces of tomato, onion and garlic would splatter all over the white tile. The red would destroy its cleanness. It would make her anger visible. Anger is messy after all. The pan would fall on the sink with another loud noise, liberating her even more.

I envy this woman down to her last bone. Because she is in control of her anger. She expresses her anger. She is not afraid of the mess it will make, of the consequences. The sauce is burnt after all. There is no turning back other than discarding it. The question is how.

My first chef used to throw piping hot pans with burnt pieces of chicken against the wall. Once, legend has it, he threw a whole fucking salmon against the spotless white tiles. He was an angry man. I respected him for that. For not caring about the food, about what others would say, about the mess. For embracing fearlessly this –let’s be honest-childish reaction.

As a child I never threw my toys against other children (or walls for that matter). As a teenager I did bang the occasional door. But it was at home, where everything was safe under the blanket of unconditional love. As a grown woman, as a chef, I’ve never thrown a hot pan against the wall.

Maybe it’s time. Sometimes you just need to end it with a bang.

Only then you can grab another onion and start making a new sauce.