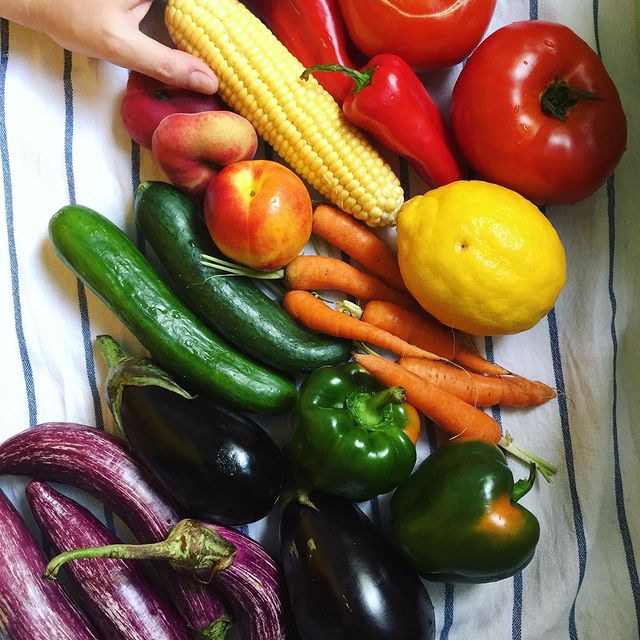 I have an aubergine. It’s not very big I think. Medium-sized. Very dark, dark purple, a hint of black maybe. I’m not supposed to have it. It’s January, and aubergine is a summer vegetable. Alas, it’s here. I see it every day in my groceries mesh bag. I wake up, make coffee, open the fridge to get milk and it’s there, sitting silent. Other times when I’m hungry it looks at me more aggressively, winks at me, I’m here, I’m the best food, but don’t eat me yet, the mesh bag will be empty without me. So I go ahead and cook something else, for I fear that the mesh bag will indeed be empty without her (yes, it’s a her). I often think of eating it, I do have tomatoes and olive oil and cheese and parsley and baking trays and an oven, you know. Perhaps I am overthinking it. Perhaps I should leave it there.

For what felt like an endless summer, the mesh bag was full of aubergines. They were everywhere and as soon as I ate some, others appeared as if by magic. In the summer the market is full of those, you see. It also has other colourful vegetables, but somehow I avoided them. But then, as autumns came, as winters came, I’m not sure how, but there aren’t that many aubergines in there anymore. The other day I went for a walk up a hill, so I kinda had to carefully look at the mesh bag, see what’s in there. I mean it was time to look again. I would take it with me, you see.

Well, to my surprise the fucking bag was full of fucking colourful vegetables. And an aubergine, but just one. I felt a bit unsettled, I was used to the monochromatic calmness of that dark purple with a hint of black. This was very new, very strange, very colourful. I have a big fat orange butternut squash for when I’m working, a white smooth cauliflower for when I lay around, bunches of green herbs and yellow tomatoes and peppers for when I’m annoyed, dark red apples for when I’m in love. And an aubergine. It’s dark purple with a hint of black.

As I climbed down that hill, with my colourful groceries mesh in hand, I felt, for the first time in years that things were somewhat sweet again. Not that kind of sweet that makes you want to vomit from boredom, like that man in the tube listening to a mundane conversation. The kind of sweet that makes you so scared you want to vomit. I returned home wanting to vomit.

I looked at my groceries bag. I slowly took the aubergine in my hands, caressed its shiny cold flesh. It’s time, I told her. I took my knife and cut it in half. With one steady move, as if I was a surgeon making the first incision. But there was no blood. No mess. I kept cutting fine rounds of the aubergine. I seasoned them with salt and pepper, placed them in a baking tray with olive oil. I took some bright red tomato passata, defrosted from my freezer and spread it all over the rounds of aubergine. You could barely see the black now, just a bit of purple. I moved faster and faster, as if I was scared that I would change my mind. I sprinkled some chopped parsley and crumbled some feta cheese on top. I covered it tightly with some tinfoil, as if I was scared it would escape. I placed the aubergine in the oven.

It’s been sitting there for days now, cooked. I want to eat it. I do not know if I’m ready to eat it yet. I think such dishes are better eaten with company. Or perhaps I need to eat it alone. Perhaps I am overthinking it.